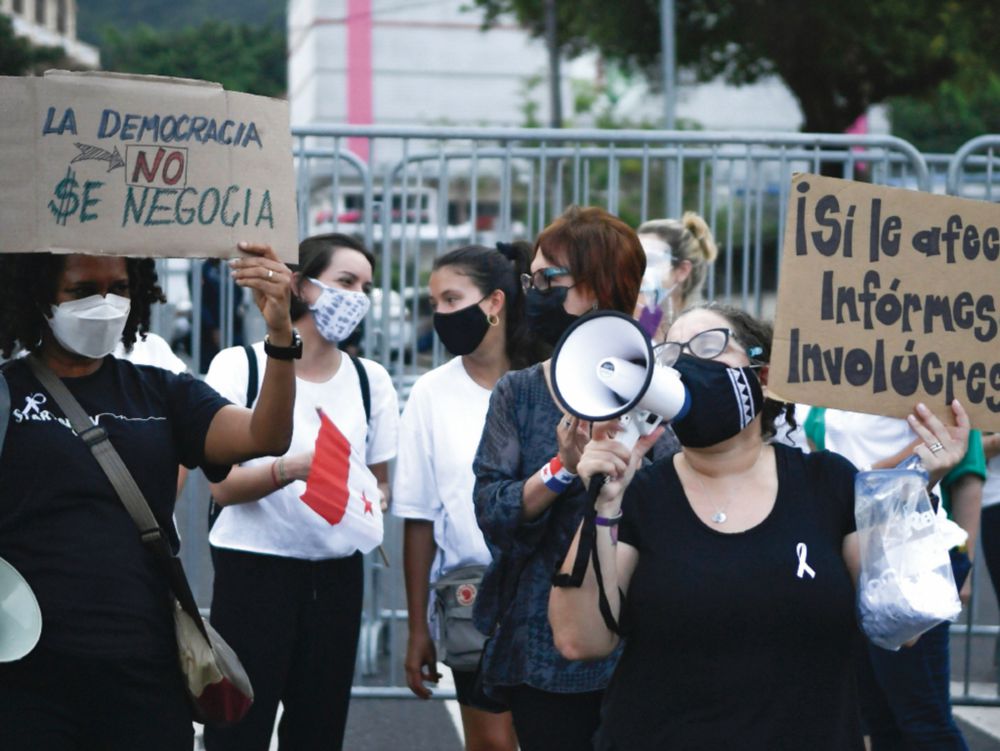 The National Forum of Women of Political Parties will march

Faced with yet another protest march on the National Assembly over electoral reforms perpetuating impunity and privileges for lawmakers, President Laurentino Cortizo,  bit the bullet and announced that he will partially veto bill 544, which reforms the Electoral Code.

A tweet published on the account of the Presidency, says that "after the corresponding evaluations" the document will be returned to the AN.

It has not been specified which articles will be banned. The Electoral Tribunal had already communicated the rejection of at least four articles of the project.

Only six deputies voted against the electoral reforms endorsed on Friday, October 15, while public rejection intensified.

According to the website of that state body, 52 deputies voted in favor of the project, six voted against, and 13 deputies were absent when voting took place.

Of the 52 votes in favor, 28 were from deputies of the Democratic Revolutionary Party (PRD). The remaining 24 are from Cambio Democrático, the Liberal Republican Nationalist Movement, and the Panameñista Party. In the group of 13 who were absent, there are deputies from all the benches.

Meanwhile, civil society, including trade unions, workers' groups, and women’s organizations, and others, were preparing for the October 20, march to the Legislature.

One of them is the “Mesa Ciudadana”, a movement in defense of democracy created in the context of the debate on electoral reforms, which called on citizens to join the march. Meanwhile, the National Forum of Women of Political Parties issued a statement in which they detailed their rejection of the project, particularly for the articles that contemplate parity.

The Electoral Tribunal, for its part, announced that it will request President Laurentino Cortizo to veto the project. In addition, they said that they will demand some articles before the Supreme Court.

Panama: Government Organization of Thugs. Becoming a lawyer, a business man, a candidate for a campaign election presents suspicions. A lawyer will have connections with bad guy money incentives. A business man will have greed and business bad guy campaign connections. A regular candidate will have an independence party and get voted out and ignored. A campaign election for a candidate is determined by where the money comes from and how. A business man will make a convincing argument for jobs and grand projects... using state funds tax payer's -$$$- for their own publicity. Then, there is China resources of vast $BILLIONS!!! But there is a price to pay with a debt owed with predatory lending to a super power nation... China! PANAMA CANNOT HANDLE FOREIGN $$$ INFLUENCE CONTRACTs BY GOVERNMENT LEADERS! NO FAIR REGULATORY LAWS, JUST PUSHING THE BUCK - $$$ ON THE BACKS OF PANAMANIANS! Candidates once elected look at this as an opportunity for grand wealth. 1. Counting Executive allowances on a regular basis is... staggering to say the least! 2. China's direct personal business proposals for individual party's mutual benefits! 3. China's one-sided commitment for all obligations for financial party agreements! 4. China's indirect control of Panama's political parties and government! 5. China's interest in research projects with all non-disclosure agreements! 6. China's interest in Panama's political sphere without the intervention of the U.S. with Panama Canal Expansion. 7. China's interest in Panama's complete lack of a defensive constitution for the state that favors Government politician's impunity. 8. Foreign nations see gaping hole opportunities to fill the void of a corrupt lapsed self-enrichment Panama government with unsatiable - $$$ agendas. 9. Panama government need for migrants to heed to the will of the political leaders. 10. Panama government need to spend for citizens welfare to have total access to the rest of Panama state funds! Panama government is reliant on the government leader's manipulation of state funds with well paid police bonuses and pacts from every government level. After a while, Panama's government will look at this as getting their share of the cut with $100,000 vehicles and family payrolls which will never disappear! How do you take away a man's payroll checks in the $1000's! A check on its own is a government check for life with guaranteed re-elections! So, a new constitution reform? What does Panamanians know about government money? What does Panama's government know about a non-Transparent Comptroller General? Yanibel Abrego guards the non-Transparent Comptroller General with her... [LIFE]!!! Yes, Panama president Cortizo is just a - FIGURE HEAD... making way for the... MAFIA UNDERGROUND!!!

Cortizo is the Adolf Hitler of Panama. Bring him down he must flee the country. Now and anyway.