A look back at the 13-day Odebrecht hearing 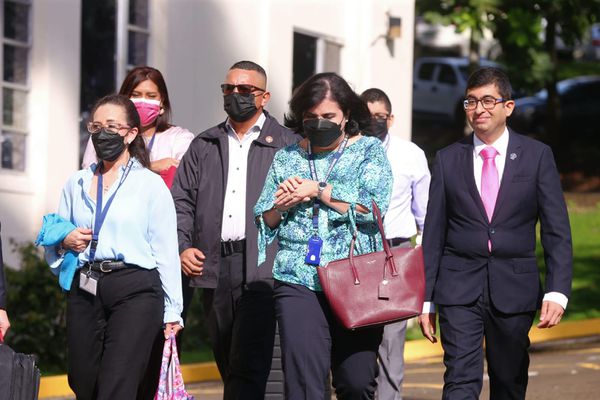 The preliminary hearing of the Odebrecht case ended on Wednesday with the announcement by Judge Baloísa Marquínez that she would accept the term allowed by law (30 days) to decide whether or not to call the 50 involved to trial.

In the 13-day hearing, the Public Ministry (MP)  exposed the complex plot used to distribute bribes, which involved companies, officials, politicians, figureheads, lawyers and banks, among others.

In turn, the lawyers of the defendants – for the alleged commission of the crime of money laundering – based their defense, mainly, on three aspects: the statute of limitations of the punishable act, the evaluation of the MP's evidence, and political persecution.

Known strategies to avoid justice also came to light: the principle of specialty in the case of former President Ricardo Martinelli and the alleged immunity of the Central American Parliament enjoyed by him and also by former President Juan Carlos Varela.

At the end of the hearing, the prosecution refuted 14 of the 15 incidents presented by the defenders and asked the judge to dismiss them.

Considered the most emblematic corruption process in recent times, the Odebrecht case closed an important stage hearing, in which the Public Ministry presented its theory and the defenders of the accused presented their arguments.

Sitting at a desk and guarded by the Panamanian flag, Judge Baloísa Marquínez listened to each of the parties in the 13 days the hearing lasted.

At the beginning of the procedure (September 12), appeals were dismissed; in the prosecution's pleadings phase, she fined two defense attorneys who caused a distraction in the courtroom, and more than once called out others who tried to break the rules and harmony.

Lead prosecutor Ruth Morcillo asked the judge to dismiss 14 of the 15 incidents presented by the defenders. She only supported that of the former magistrate of the Supreme Court of Justice, Jerónimo Mejía, who alleged double jeopardy in the case of the Uruguayan citizen Maya Cikurel.

Morcillo refuted, the thesis of the lawyers of former President Juan Carlos Varela, that the Public Ministry does not have the competence to investigate him, since the former president is a deputy of the Central American Parliament and, therefore, the Court is the entity you should investigate it.

Specialty principal
Similar reasoning was used by the defense of Ricardo Martinelli who, in addition, once again resorted to the supposed principle of specialty.

"It is already an issue overcome... This court has already issued a concept," said the prosecutor and cited three court orders and one from the Second Superior Court that support that statement.

In the arguments phase, several of the lawyers of the 50 defendants raised the alleged non-existence of the preceding crime of money laundering.

An allegation that, according to former magistrate Harry Díaz, is "unbelievable." Diaz, consulted by La Prensa, said that only "a little common sense" is needed to analyze "a clear and evident situation": that Odebrecht paid bribes to officials and individuals in exchange for public infrastructure projects.

He said the conviction in the US of Ricardo Alberto and Luis Enrique Martinelli Linares for using the financial system of that country to launder $28 million in bribes from Odebrecht constitutes further evidence in favor of the prosecution.

"Money laundering is nothing more than trying to make it appear that funds from illicit activities are legal," he said, explaining that by acknowledging the use of the US banking system for this purpose, there was a confession that the funds received from Odebrecht t were bribes.

The former magistrate also valued the confessions of former executives of the company itself, which, agreed to pay $220 million to Panama, as a fine. “Trying to say that there is no precedent crime is calling the citizenry ignorant since the company itself recognized that it paid bribes in Panama,” he added.

The lawyer Rodrigo Noriega, said there are rulings of the Supreme Court that say that a prior offense is not needed to prove money laundering..

Noriega stressed that it was a "civilized" process despite that there were hostile moments, direct and indirect attacks on the Public Ministry and former anti-corruption prosecutors Tania Sterling and Zuleyka Moore, among others.