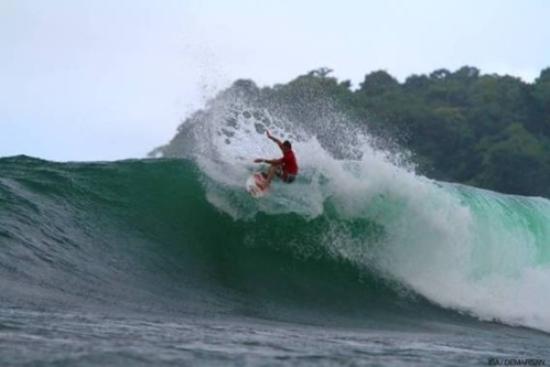 Miguel Batista, mayor of Pedasí, said that in the operation was carried out jointly by Police and health officials, and about 40 people were surprised on the beach, but most fled.

He said they were surfing and walking on the beach like on a normal summer day.

According to a justice of the peace, Nelly Vera, eight men and five women, were fined $ 100 each.

The mayor of Pedasí said that a minority of the population does not seem to understand that there is a national emergency and that there are decrees and restrictions that must be complied with.

The regional director of health for  Los Santos Ayvar Hernández said that thanks to the sanitary fence and all the controls scattered throughout the province, only one indigenous coronavirus case has been reported in a 43-year-old man residing in Sabana Grande, Los Santos.

Venao was a hotbed of filthy hippie drug users for forever and the Mayor of Pedasi and the cops looked the other way. Now a cold virus comes along and they want to arrest people? One things for sure anyone caught holding Panama property when the music stopped on this one is totally screwed. I keep hearing chatter from my local friends here that the govt is finally going to start assessing and taxing the gringo properties in the interior. Places along the beach and in gringo communities like Pedasi, Cambutal, Santa Catalina etc,,, are gonna pay for this corona hoax debt. Gringos are the low hanging fruit!!

Captain, you're so right, they're not paying attention to what is happening around the world, they don't know how many people have died, they don't know that there is no enough equipment in hospitals for everybody or that doctors and nurses are so tired of working 12 to 18 hours a day to save lives, they don't understand the concept of stay home but not to gather with your neighbor and party. this is serious, very serious and everybody must do their part!

I cant believe, given the seriousness of this epidemic, that people are posting on here criticism of the government’s attempts to eliminate this scourge. Are they suggesting there is no virus circulating in the world at this time. Don’t they ever switch on their TVs. Aren’t they following the awful reports from Italy and Spain ? What’s with it with these people calling out leaders as tyrants and dictators. If its all false why don’t they go volunteer to work in a hospital morgue for a few days and perhaps that might provide some form of awakening. Meantime get real...this is a massive problem ...abide by the rules and be part of the solution and not the problem.

I’ll bet Panama has this put to bed many months before they wrap it up in the US. Too much entitlement, too hung up on “rights,” no clue on the difference between needs and wants and no concept of the needs of the many far outweigh the needs of the one.

This is what it's like to live under tyrannical rule. Brainwash the people to live in constant fear and to obey commands without using common sense and reasoning. Then turn your brainwashed minions into an army to fight against the normal people who think for themselves. That's the world we live in today.

Please Nelly Vera raise the fines for the next bunch to $1000 each and see if people finally start to learn . . And check often please

lol they were surfing and walking on the beach like a normal summer day...good for them...to a lot of sane people that's how the day is...for the infected wacko fearmongers they are putting everyone at risk...1 case in Sabana Grande, 100kms from Venao...great job tyrants