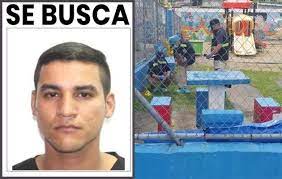 The National Police is offering a reward of $10,000 for information that allows finding the location and capture of Yeison Felipe Possu Mera, a Colombian national, with passport AS535076.

According to the authorities, Possu Mera (30 years old) is allegedly linked to the murder of Agustín Lara Díaz, deputy director-general of the Public Registry, on November 14.

González Sánchez's connection arises from the statement of a protected witness who described him as the person who was driving the motorcycle.

Lara Díaz was shot dead by two men who were traveling on a motorcycle, while the activist of the  Democratic Revolutionary Party participated in a registration campaign for his group. Another person was injured.

Crime wave here just keeps getting worse. I'm sure he's scurried back across the Darian Gap and is eating an arepa in Colombia already.