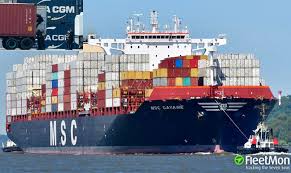 A freighter that stopped in Panama and transited the canal l carrying over 16 tons of cocaine with a street value of over a billion dollars, is still being investigated in Philadelphia. with the possibility, it could be carrying more.

Authorities believe  the MSC Gayane could contain another 30 tons of cocaine.

"This is one of the largest confiscations in the history of the United States," said US Attorney William McSwan in a message on his Twitter account.

Threat to millions
"This volume of cocaine could kill millions-millions of people," he added.

The contraband, with a street value of more than $1 billion, was in seven containers on board the ship, and so far the second mate and one crew member have been arrested and charged.

According to CBS,TV the suspects have already admitted that they had helped load the cocaine in the Gayane from at least 14 other vessels that made voyages from Peru.

The ship, owned by Mediterranean Shipping Company, had previous stopovers in Chile, Peru, Panama s before berthing in Philadelphia on its way to the Netherlands.

The authorities of at least six municipal, state and federal agencies, including the Customs and Border Protection Service and investigators of the Department of Homeland Security, continue to inspect the ship.

The Gayane had docked at the Packer Avenue Marine Terminal, from the Port of Philadelphia, early Monday morning after a months-long cruise.

The Philadelphia Enquirer quoted an unidentified port employee as saying that the researchers boarded the ship with dogs trained to sniff out drugs, about two hours after its arrival.

The authorities found the cocaine hidden in bags and stored along with legitimate cargo in containers destined for the United States and Europe.

Coast Guard agents examined the crew members and found traces of the drug in the hands and arms of the second officer, identified as Ivan Durasevic in the arrest documents.

Durasevic told investigators that he had been recruited by the first officer, to help at least two other crewmembers and four people wearing masks, to lift cocaine from a fleet of small boats which approached the Gayane shortly after it sailed from Peru.

The suspect said he had been paid $50,000 for his cooperation.

The other detained crew member, Fonofaavae Tiasaga, said Durasevic had recruited him for the job and paid him 50,000 euros to load cocaine on one of the ship's previous trips.