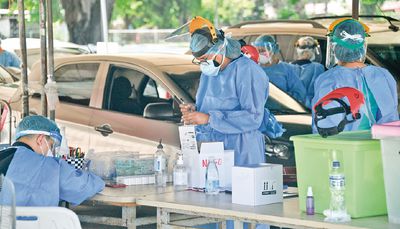 More swab centers are being activated.

The increase in new Covid-19 infections is notably being registered in the province of Panama, with more than 200 daily infections reported in two townships in the past three days.

According to the data provided by the Ministry of Health (Minsa), the sectors of the metropolitan area of ​​San Francisco and Juan Díaz added at least 240 cases daily between Wednesday and Friday.

In addition, in the last two days, five districts were reported that exceeded the figure of 200 new infections. Among them Betania, Tocumen, Rufina Alfaro and Don Bosco.

According to the latest epidemiological report from the Minsa, the country exceeds 55,000active cases.

The Panamanian epidemiologist, Xavier Sáez Llorens, reported that based on international scenarios with the Omicron variant, the maximum number of diagnosed infections should be reached in one or two weeks so that later there will be a decrease in cases.

"Unfortunately, serious cases will occur primarily in people who are not vaccinated or who do not have a complete schedule, especially in groups at higher risk due to age and/or comorbidity," he wrote on his Twitter account.