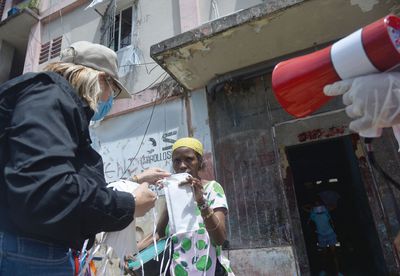 The round the clock  curfew will return to Panama and Panama West from 5pm Saturday, June 6  to  5 am Monday, June 8 avoid the collapse of the health system as clusters of coronavirus cases continue to spread reports the Ministry of Health (Minsa).

On Thursday June  435 new infections  were reported and the death toll climbed to 363.

The Minister of Health, Rosario Turner, said that due to the "behavior" of a part of the population ch has not complied with sanitary provisions, the curfew will be extended in the provinces of Panama and West Panama.In the rest of the country, the curfew is maintained from 7:00 pm and until 5:00 am

Sanitary fences have been imposed in the Chiriquí Grande district, as well as in the Bocas del Toro communities of Pantanal and Finca 01 in the Changuinola district, and in the La Solution neighborhood.

On Thursday. June 4 representatives of the ministries of Health, Social Development, Agricultural Development, and Public Safety met to strengthen actions against Covid-19, including taking samples and delivering masks and food in the townships with the largest number of cases.

According to the latest reports some 20 townships have the Rt (contagions per person) above 1. These include Santiago in Veraguas, Pacora, Calidonia, Curundú, and Tocumen in the province of Panama. Two of the clusters are in correctional facilities.

Public health specialist and former representative of the World Health Organization (WHO) , Jorge Luis Prosperi, said that it is necessary to act aggressively in these townships.

In addition, the director of the Metropolitan Health Region, Israel Cedeño, stated that 60% of cases are reported in the townships within his jurisdiction at the national level, which is why they are reinforcing sanitary and control measures.

Wow now I know WHO runs the country and it is not your elected representatives. It is time to decide for the Panamanian people what you are able to tolerate. A dictatorial regime like Venezuela or to rise up and take back your country. You have the power. Cortizo has given it away to foreign interests. Do your own research. Who is the Director General of the WHO. A non doctor declared to be a 3rd party leader to Ethiopian terrorists. Really!! None of this lock down makes sense. So why is it happening? Looks like a Petri bowl for how much will you take.

Captain and others. If I hear one more time that you are wearing a mask to protect me, I’m going to scream. You idiots! If you touch a contaminated surface then adjust or otherwise touch your mask, the outside of your mask is now contaminated even if everyone else is wearing a mask. And touching your contaminated mask then swiping your face wIll give you the Virus irrespective of your new favorite word—viral load. I doubt you even know what it means but to you, it sounds impressive. And most masks worn are not washable nor are the ones handed out by the government.

Sara are you sure your mind is ok ? Please go in one of these psychiatric hospitals and undergo a long long therapy. You are one the these people we don't need any more.

Is it Perdo or also Pedro we have now on here. ? Which one has the donkey ?

According to Christian Holy Bible the only people called the chosen ones are the origional Jews from Israel from David family tree. However, we all are Gods cosen people to accept the gift of life everlasting. It is for EVERYONE. Sounds like some of you want to stir up your country with Communist racism See what that is doing in USA!?? It is horrific.

The people must learn to comply then they can be given what they need from the politicos. The virus has taught us that rules must be obey and the people are learning that. JB you are chosen to be removed from my country like all gringos should. You see we have the power to give but also the power to take away so it's best to obey the rules that we set. The new normal is just starting but it will be glorious.

First, I have not encountered a single person let alone a group sneezing/coughing with or without a mask during this so-called Pandemic Second: the person handing out masks in the photo is problematic: can she explain the “contamination” mask procedures bc the photo violates them as a starter; third: can anyone scientifically prove that (absent sneezing and coughing) masks can filter the nanoparticles of the virus by the masks worn by the people on the street or is it like one scientist explained—trying to stop ants with a chain-link fence; Fourth: does everyone understand hypoxemia -that is when a mask, for example, can restrict the exchange of oxygen with the carbon dioxide as exhaled and trapped in the mask; lastly, where you there in line behind me when an older gentleman passed out from wearing a mask too long and, since older persons have less ability to exchange the two gasses under optimal conditions. Just some points to consider

Hypoxia through mask use is a nonsense. Look it up. We are not talking of medical grade masks here but anything to reduce viral load. Incidentally even speaking can project the virus up to 7 feet. Its reduction of viral load we are trying to achieve to reduce the severity of the disease if infected. Again its for others not for your benefit so be considerate. It is not all about you. Masks can be washed daily and reused. Easy to make . Good to see now that WHO has also supported their use as are more and more countries insisting they be used. Good to see Panama is ahead of the curve here.

Good. So at least there will be no "church visits", and less indoctrination by the pedo-catholics. ps. "The chosen ones"-my ass. Chosen to be part of Idiocracy-II.

New cases are a good thing and will bring us closer to herd immunity. Get out like me and enjoy life! Stay thin and fit, don't be an alcoholic or diabetic. Stop being obese. If you have abused your body and immune system then it's your own fault, hide inside. The rest of us can continue to live as normal Because we are the chosen!

There are thousands of fit young people who are listening to you from the graves of San Paulo right now.

Turner sould go in front of the UN tribunal for human rights followed by a work camp behind the URal/Russia.