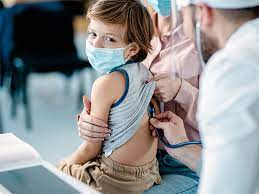 AFC - The Pfizer / BioNTech vaccine against Covid-19 is "safe" and "tolerated" by children aged 5 to 11 years, to whom the adapted dose generates a "robust" immune response, according to the results of a study announced Monday.

The vaccines administered to this group contain a lower dose, but generate a reaction "comparable" to that observed in patients between 16 and 25 years of age, they indicated in their statement.

They also stated that they will send this data to the authorities "as soon as possible."

This is the first clinical data for this age group.

The drug regulatory agencies of the European Union and the United States had licensed Pfizer / BioNTech and Moderna vaccines, both based on messenger RNA technology, for 12 years.

Due to the spread of the delta variant, "since July, pediatric cases of Covid-19 had increased 240% in the United States, signaling the need for vaccination," said Albert Bourla, CEO of Pfizer.

The doses of the drug in this group are 10 micrograms per injection, instead of the 30 given to older groups.

Its side effects are "generally comparable" to those seen in people ages 16 to 25, the labs noted.

They are partial results of a study carried out on 4,500 children between 6 months and 11 years old in the United States, Finland, Poland and Spain.

The two companies expect to publish in the fourth quarter the results of the range between 2 and 5 years and 6 months to two years, which received injections of 3 micrograms.

Both shots...no clots, no problems or side effects. Go figure.

Captain has buyers remorse. Panic as the clot shot spreads through the body. Pfizer authentication was for a Vax you can not even get in the US. But don't let true facts get in your way captain

It has been nice to read articles that were not followed by the pernicious stupidity of those who spread lies and disinformation. Climb back under your rock minsa and keep your ignorance to yourself.

If that was one of your children who was now dead I think you would be extremely upset to know that there was an available vaccine that has taken so long to roll out. No. Its not fat old gringos that are being affected but young vibrant kids who have lost their lives thanks partly to the likes of those posting here rubbishing the LIFE SHOTS

Full of nonsense as usual. Has not MINSA taken over from that Russian Avakian ? Your statement is completely wrong. Full approval has been given to Pfizer so emergency use no longer applicable .Moderna full use is likely this or next week .There are 250.000 kids in US alone down with Covid and 509 Have died. If anything is hitting the fan that news is. The sooner the vaccine program starts for that group the better.

For Europe: As the "emergency approval" of all vaccines is ending in the beginning of 2022, and NONE of the vaccine-companies have submitted an application for renewal or new emergency approval - this will END very fast VERY soon! Even if they wanted to, they would NOT get another approval because so many side effects, sufferings and deaths caused by these substances have become known in the meantime. Now ask yourself, WHY is it that there is currently a huge agenda against the unvaccinated...an agenda of persuasion with lottery winnings if you get vaccinated etc, an agenda of "giving away" the vaccine to poor countries....etc etc etc THEY know, that the shit will hit the fan very soon...VERY OFFICIAL!