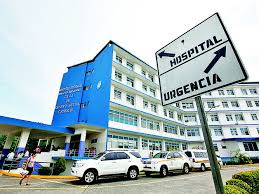 THE Rafael Hernández hospital in David

Four people, a 63-year-old, and three breastfeeding children died in  Chiriqui, after testing positive for influenza, which led to complications says the regional director of the Ministry of Health, Alcibiades Batista.

Batista confirmed that the elderly person, who died at the Rafael Hernández hospital in David, had not been vaccinated against influenza, tested positive and died of myocardial infarction.

The three minors, two boys and a girl, came from the Gnäbe Buglé region and gave positive results, and died in the Domingo de Obaldía hospital.

Batista said that the 80,000  vaccination doses that were destined for Chiriqui have been exhausted and the Ministry of Health was asked for more They sent a limited amount and it will only be applied to high-risk persons such as pregnant women, children and people who suffer from high-risk disease.

He said the death of adults and children who do not receive the flu vaccine is regrettable because it is free and seeks to prevent complications in the population especially the most vulnerable.