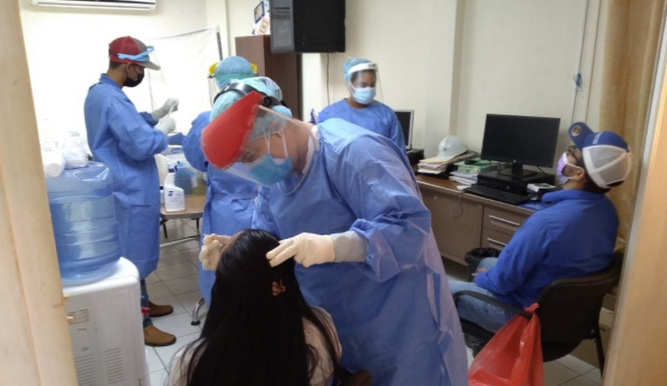 Panama Regional  Health Director Israel warned on Thursday of a rebound of coronavirus cases and said that teams were on alert.

Cedeño highlighted that in the region there have been more than eight weeks with a downward trend, but that in the last epidemiological week in the in the townships of Bella Vista, Betania and San Francisco there has been a slight elevation of cases.

"Not like we had in November, December and January, but townships that were reporting three or four new cases a day, there have been days that have reported seven, eight and even ten," Cedeño said.

He explained that numerically this is considered a rebound in cases and that the teams are alert in those areas to verify these new cases, but that in general they are staying below what was expected, taking into account that there has not been a third wave in Panama.

Cedeño's statements were made during a tour of the vaccination centers that are enabled in the 8-10 circuit, which includes seven townships in the eastern sector of Panama.

Regarding immunization, Cedeño announced that yesterday on the first day for the application of the second dose for older adults, teachers and pregnant women, 9,100 doses were placed, a figure somewhat higher than what they were expecting.

The vaccination process is also taking place in parallel in the Arraiján district), which also has its second day this Thursday.

In this district of the province of Panamá Oeste, it is planned to vaccinate about 30,687 people over 60 years of age, educators and pregnant women.

Realize the PURE EVIL these covidEVIL-FREAKS endorse such as harleyrider, captain, observer, sral, ajd and the rest of this evil group of scum so that you know the evil they represent, support, and align themselves with the 4th Reicht! You are either for humanity at this point or against humanity and these covidSCUM are the enemy of humanity. They have shown this over and over as those that denied the last holocaust. Remember these evil scumbags are the same colluders who supported Nazis...it took evil individuals to spread their lies, deception, fraud and propaganda to allow mass murders and genocide! These guilty extremely evil covidSCUM raise their right hand proudly to salute and support the 4th Reicht obediently! Do not ever forget their collusion in this genocide as they are against humanity, evil and demonic scum of the earth! | There is no disinformation below covidscum captain only the covidSCUM who are guilty of perpetrating these crimes just read what they write about me. They want everyone silenced and censored. Sorry covidSCUM the truth is reaching the world and I know that angers you delusional sickos. These same covidSCUM drive alone wearing two masks, I wonder if they lie in bed alone wearing a condom? LOL LOL THESE COVIDSCUMbags are so sick suffering an emotion pandemic and delusional psychoses! Haha you sicko covidSCUM!

oh ya, what planet are you on? You said the helicopter couldn't fly moron. No link needed. Plenty of videos to prove it. And what the hell does Harley sales have to do with the conversation?

Yes hardlygodavidson i am the same guy that says you can not fly any winged craft in zero atmosphere. But if you habe a link to prove they can i will sure read it. And 2nd NASA saod they lost the info and formula on how they got to the moon LOLdid they have that written on a sticky pad note stuck to their commodore 64 screen. Oh ya please explain how they got through the van allan radiation belt also please. So i see HD closed 1 plant the other day and was auctioning off the line. I guess the new generation is too smart to buy 1940 technology at 2021 prices.

If you listen to tucker carlson for information, you are the loser. The trust fund pundit has nothing but unfounded opinions and is nothing but a ratings whore.

Harley, is it ever possible for you to criticize the message instead of the messenger? Tucker Carlson has some great monologues and even you might learn something from him — isn’t it obvious he has more upstairs than you’ll ever have, otherwise you’d be earning his big bucks instead of posting useless and denigrating on NRP. Losers love to put others down instead of building themselves up. I can probably guarantee you will not watch the Academy of Ideas link I just posted — a no-it-all loser is still a loser

Looks like the time is ripe for a new round of fear mongering so that they can impose tyranny again on its citizens. And you can bet your bippy there’ll be no data coming out of previously-vaxxed persons who are now testing Covid-positive. That would be counterproductive to pushing ahead with vax and getting the public prepped for that new “booster” shot the Pharm industry has in the pipelines. It is wise to understand the concept that “fear is the foundation of most governments” and how fear is used as propaganda techniques to inflict tyranny on the masses under the concept of Collectivism, a term which is foundational to communism, fascism, and socialism. “The Common Good before the Individual Good” writes Adolf Hitler. This may be above the psychological analysis of most on this site but I will continue to push the societial manipulation by tyrannical forces and concepts of mind control that shape our lives and contribute to our loss of personal freedom. For those intellectually stimulated, I challenge you, for a higher understanding, to take 15 minutes to view: How the Greater Good is Used as a Tool of Social Control”: ||. https://m.youtube.com/watch?v=gvPKTVK10JE&feature=youtu.be — remember that the mind once expanded will never return to its original dimension; but I suspect many posters here are quite content in their current mindset. Pity!!

Younger patients causing Florida to have among the highest COVID hospital rates in country. https://us.yahoo.com/news/younger-patients-causing-florida-among-100000138.html. Now "brian" tell us more about how well India is doing, and Nicaragua moron.

Oh Ya....aren't you the same person who thinks the moon landing was faked and the mars helicopter wouldn't fly??????

Well they best be on alert for when those brain dead morons that took the DNA altering jab start dying in large numbers from their own bodies attacking themselves. Can't wait until normal flu season, get popcorn so you are ready when the chit show starts.

The good news is that Brian has been banned by Facebook The bad news is that he will have more time to troll the internet to dig up more "Believe it or Not" nonsense for the credulous that Ripley converted into a gold mine.

Tucker Carlson: How Many Americans Have Died After Taking COVID Vaccines? https://childrenshealthdefense.org/defender/tucker-carlson-how-many-americans-died-covid-vaccines/

Here is what Florida is doing in deaths for the last 6 months! https://ibb.co/M88d5Ck Florida 100% normal now it is time for the other criminals to be either arrested for their crimes or open society back to normal. People know the lies and propaganda are no longer working across the world and tired of it all. | CovidSCUMbags are spreaders of lies and propaganda that are harming people. Time to arrest anybody involved in this human torture of the public and destruction of the economy. ARREST THEM as it is time for them to pay for their crimes as they are the real virus and plague upon humanity. Nobody can justify this endless scamdemic when countries are opening up and no issues! End the fraud, lies and propaganda arrest the criminals now! The criminals behind this are nonessential we the 99.99999% are the essential people. Take off the masks, stop obeying illegal edicts and we need to arrest the criminals behind these crimes. Enough is enough with the endless "false cases" propagandized as new cases with zero clinical symptoms based upon FRAUD PCR tests found to be fraudulent in 5 countries! This is old now time to rise against these criminals and end this virus plague, the real plague and treasonous scum who screw over their citizens and bow down to the Klaus Schwab WEF and UN! ENOUGH! This scamdemic was over a year ago and been milk to death the only people still buying this sicko lies are sick people and mentally retarded...any idiot can figure out we have been lied to by leaders who committed crimes. Time to arrest them and make them face charges for their crimes against humanity! There will be no rock anywhere on the face of the earth any of these covidSCUM will be able to hide. Billions know the truth and soon billions more will too! If you ever wondered, if you, your family, or friends, would have complied in 1930's Germany, now you know! Remember the covidSCUM that have spread lies and propaganda so they played their part in this crimes against humanity!

TEDROS THE PSYCHOPATHIC TERRORIST NON-DOCTOR (NEVER BEFORE IN W.H.O HISTORY HAS A NON MEDICAL DOCTOR LEAD THE WORLD OR LEAD WHO! NEVER! HE HAS ALSO BEEN BROUGHT BEFORE COURT ON HUMAN RIGHTS ABUSES!!!) SAYS VACCINES WILL NOT END THE PANDEMIC https://www.bitchute.com/video/sSGIgWJHzWL7/ WE'RE NEVER GOING BACK TO NORMAL SAYS NAZI PSYCOPATH KLAUS SCHWAB https://www.bitchute.com/video/FKNNbMZi9DfJ/ Listen to what these psychopaths are saying…they are trying to break the back of society and destroy freedom, the family, destroy jobs, businesses and blow up the economy for their dystopian great reset, which is not so great. I know hundreds of people in prison across the world right now personally. They are depressed and desperate they are telling me they are getting fed up with all of this, being imprisoned and really getting angry at their governments! MONOPOLY; AN OVERVIEW OF THE GREAT RESET – FOLLOW THE MONEY https://www.bitchute.com/video/QUrQnCAD2Igd/

Florida is FREE 100% and BACK TO NORMAL!!!! Having the most success as people live normal. Here is the proof covidSCUM are liars and working with the criminals against humanity. Look at this graph. https://ibb.co/M88d5Ck | Here is Fort Lauderdale beach normal this past Saturday https://youtu.be/0lHY18OMnno is Florida this weekend on A1A by Los Olas in Fort Lauderdale, you would not know it was the dystopian world the W.E.F/U.N. has created to push their agenda and is happening across the planet now, would you? It looks just like 2019, doesn’t it? Florida has been completely open with declining deaths for 6 months in a row! How much longer do you think people across the world are going to tolerate these authoritarian police states these criminals are running globally? How many of you would like to live normal again like these people are enjoying on the crowded beach? No masks, no human separation, no imprisonment, no authoritarian government edicts, no imaginary Gestapo curfews in evenings or weekends, no coercion, no government abuses, no forcing people out of jobs and businesses, no forced injections, no injection passports to live like you did before they did this to you and finally no people being beat and hospitalized for daring to question or protest the criminal actions they are living under!

Yes the new variants are beginning to arrive and the vaccines will not stop them. New cuarentenas are our only hope.