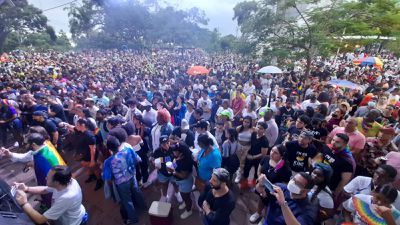 Thousands of people participated in the two 'Gay Pride' marches in Panama, which took place on Saturday, June 25, in Panama City organized by the World Pride Panama 2022 committee and the Fundación Iguales.

The World Pride 2022 march started at 4:00 pm, from the Via Argentina Metro station and ended at Parque Urraca, in the Bella Vista district, where thousands of people gathered to participate in the Rainbow Show, featuring drag queens and artists

The other march, from Fundación Iguales, left at 3:00 pm, from Plaza 5 de Mayo, took the coastal strip and ended in Plaza V Centenario, in the Casco Antiguo, district of San Felipe.

Both activities were aimed at making the LGBTIQ+ community visible in the country and claiming the rights of this population. The multicolored flags were not lacking, balloons, joy, and enthusiasm.