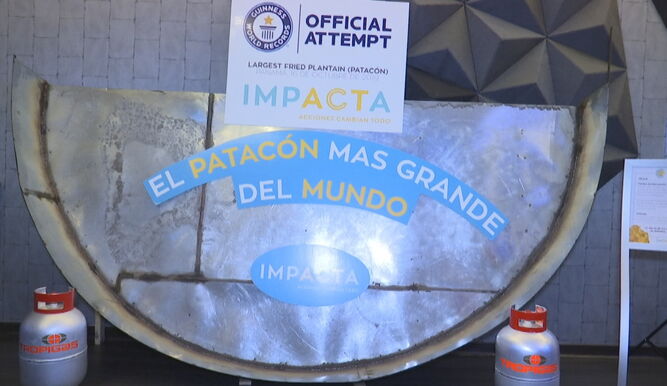 Indigenous Panamanians of the Emberá ethnic group are seeking to break the Guinness Record for the largest patacon in the world, to draw attention to the need to maintain ancestral cultures, organizers announced Wednesday.

The challenge will take place on October 16, World Food Day, when more than a hundred indigenous people intend to cook a 100 kilos patacón in the Ipetí Emberá community, 50 kilometers east of Panama City.

To prepare the gigantic patacón, which consists of a fried flat piece of green banana, 850 bananas from the indigenous community, 1,500 liters of oil and a 3.5-meter diameter pot will be used. The patacón will be 3 meters in diameter and 2 inches thick,  (5.1 centimeters).

"Our customs are being impacted by modernity and capital life," said Sara Omi, of the Emberá General Congress of Alto Bayano.

"That  making the world's largest patacón in our community is an opportunity to show everyone the need to preserve the country's native culture" and show "who we are, how we live and how we share," Omi said

The preparation of the dish will be directed by Panamanian chef Rachel Pol Policart.

"We want to put our country on the map with a record and promote Panamanian cuisine," Pol said.

Banana is one of the main ingredients of the Emberá cuisine, which is eaten parboiled, roasted, mashed, sliced or as patacón.

"We sow banana every year for our local consumption. Only five percent of what we produce is dedicated to sales," said Omi.

The Emberá are an indigenous ethnic group from Panama and Colombia.