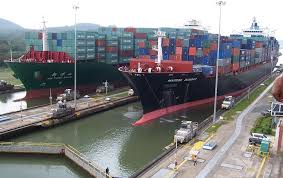 Five or six Neopanamax vessels pass through the new locks of the Panama Canal every day. They are 50%  container ships but the daily quota usually includes one carrying liquified natural gas (LNG).

The daily activity adds up to 6,497 Neopanamax vessels in the three years since the new locks began operations.

It took 10 years to develop the project since the referendum was held in 2006 until it was inaugurated on June 26, 2016. In 2009 it was awarded the largest contract of the entire expansion project that included the design and construction of the third set of locks, awarded to the United for the Canal Group, with which there is currently litigation in arbitration for alleged cost overruns.

The expanded Panama Canal has also reaffirmed the role of the interoceanic highway as a greenway for global maritime trade by offering greater capacity and fewer freight movements.

As a result, the Neopanamax locks have achieved a reduction of more than 55 million tons of CO2 since its inauguration.

In combination with the Panamax locks during the same period, more than 75 million tons of CO2 were reduced, which is equivalent to the capture generated by more than 150,000 thousand hectares of forests, says the Panama Canal Authority.