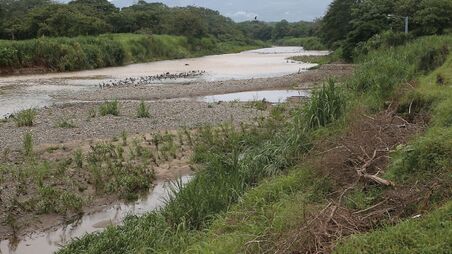 The Public Ministry has opened an investigation into environmental damage to the Pacora River, east of Panama City

The river has been subjected to damage for at least two decades, as a result of the extraction of sand and stone, leaving its  its waters at a low level. Gabriel Rodriguez

The criminal complaints, filed against local authorities and individuals caught extracting minerals from the river without having permits, were presented by Susana Serracín, environmental lawyer and president of the Alliance for Conservation and Development.

Serracín said she expects the Environment Prosecutor of the Public Ministry, which takes the cases, to carry out the relevant investigations.

The lawyer said that the defendants - whose names were reserved because of the investigations - are violating Criminal Code rules related to ecological crimes, which they are demonstrating with the evidence and witnesses that attest to the damage that is being caused to the river.

"I hope that during the administration of President Laurentino Cortizo, the concessions for extractions in the river will stop," said Serracín.

The negative effects that the extraction of materials has been causing the river were demonstrated internationally 19 years ago, when the residents won a lawsuit they filed with the Central American Water Court that, among other things, ordered the sanctioning of six extraction companies.

It was an important decision  - although not binding - because it was dictated by a panel of experts in water sources, which determined that there were a “series of irregularities” along the river basin, which in the future would cause a crisis of Water for human consumption.

That moment has arrived. Serracín said that the population of Pacora is at risk because the current demand for water is sometimes higher than the available supply, and on other occasions, the amount available is low because the bad condition of the river affects the quality of drinking water .

In fact, due to the low level of flow, the water treatment plant located in the area, during the dry season works at 75% of its capacity