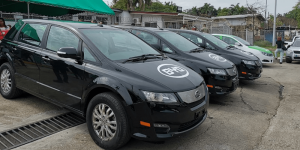 China’s BYD company which is currently providing an electric bus to Panama ‘s Mibus service for evaluation was recently commissioned to deliver the first of what will eventually be a fleet of around 1,500 all-electric taxis in of Colón in Panama in cooperation with Ensa Servicios and Traservi say industry reports.

A total of 1,500 electric taxis are planned for the province of. For now, the fleet consists of seven BYD e6s that have just been delivered. A further 30 electric taxis are to follow soon and in the second phase an additional 60 EVs by the end of the year.

The partners will also be responsible for setting up the charging infrastructure with the aim of building a solid foundation for promoting electric mobility in Panama.

The three companies, BYD, Ensa Servicios and Traservi, have already inaugurated the first rapid charging station for electric taxis in Colón province. The charging station is located outside the local offices of ENSA in the city’s Arco Iris district. ENSA will also deliver a fleet of six electric buses to Ruta Urbana de Colón, a local operator that plans to electrify around 100 buses in the longer-term.

BYD has  already signed a cooperation agreement with MiBus and ENSA Servicios to bring BYD’s K9 purely electric bus to Panama City as part of a six-month pilot scheme.