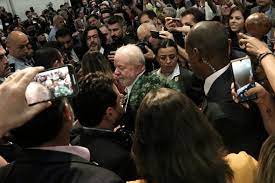 HARM EL SHEIKH, EGYPT/ Received as a hero of the environmental cause, the Brazilian president-elect Luiz Inácio Lula da Silva raised the spirits of the activists at COP27 on Wednesday, somewhat depressed by the tight security measures and the isolation of the conference.

"My impression is that it represents a reversal after a wave of populist and anti-ecological right," Melissa Yokoe Ashbaugh, a student at the American University of Connecticut, told AFP as she watched the chant-filled wait of supporters of the leftist leader.

"Lula represents a political change for Latin America. It is a shift towards the protection of the planet, the Amazon, human rights, the rights of indigenous peoples," added Adrián Martínez Blanco, from the Costa Rican environmental organization La Ruta del Clima.

Both activists, however, were eager to see the 77-year-old political veteran, who has made an unusual return to politics after being jailed on corruption charges.

Lula's vitality
The UN security agents had to close, due to too many people, access to the room where the president-elect spoke, who apart from a somewhat hoarse voice, shows vitality in his public interventions.

In the Egyptian coastal city, Lula alternates between public events and bilateral meetings, according to his team.

"Brazil is back," declared Lula, drawing the enthusiasm and cheers of his Brazilian supporters, but also dozens of onlookers, including official delegates.

"The air is electrified with hope and expectations," cried a statement from the World Resources Institute.

Standing out in the audience was the acting president of COP27, Egyptian Foreign Minister Sameh Shukri, who paused during the complex negotiations for the conference's final declaration.

The effervescence caused by Lula somewhat repaired the scant impact of civil society in this conference organized in the extreme south of the Egyptian Sinai, in an isolated area even from the spa city of Sharm el Sheikh.

Faced with images of tens of thousands of protesters at last year's Glasgow conference, or other COPs plagued by incidents inside and outside the negotiating arena, this year the climate conference is proceeding very calmly.

The event has brought together more than 45,000 people, according to the Egyptian presidency.

But each day only a handful gather outside or inside the huge convention center, shouting slogans or distributing pamphlets.

The 27th UN climate conference will not go down in the history of the COPs because of the environmental mobilization, but because of the presence of plainclothes police or the taking of information from the participants, which caused protests from several delegations.