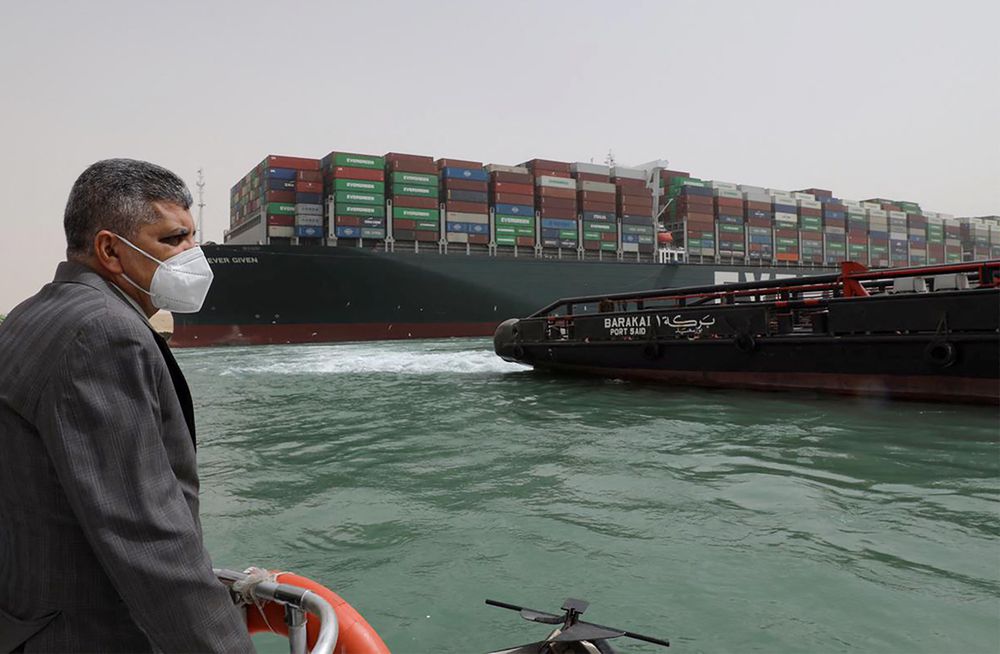 Navigation in the Suez Canal was halted   on Thursday, March 25, and the stoppage  could  last days or weeks as the task of moving  the gigantic Panamanian-flagged container ship that has blocked traffic on this key   route between Europe and Asia since Wednesday, is proving “extremely complicated”

"The maritime authorities indicated that 13 ships of the northern convoy (coming from the Mediterranean Sea) (...) that were supposed to pass are stopped in waiting areas until the ship is completely dislodged," said George Safwat, spokesman for the Canal Authority. from Suez (SCA).

The Japanese company Shoei Kisen Kaisha, owner of the gigantic ship, admitted on Thursday that they are facing "extreme difficulty" to put the ship afloat.

The incident, which occurred on Tuesday night, caused massive ship jams and significant delays in the deliveries of oil and other commercial products.

“Congestion... will take several days or weeks to reabsorb, as it should have a knock-on effect on other convoys, schedules, and world markets,"  estimates. Ranjith Raja, Head of Middle East Oil & Sea Research at financial data aggregator Refinitiv.

'Extreme difficulties'
The "Ever Given", a vessel of more than 220,000 tons heading to Rotterdam from Asia, ran aground Tuesday and blocked the southern section of the Suez Canal.erts cite strong winds as one of the causes of the incident on this 60-meter-high ship. The SCA also speaks of a sandstorm, which reduced visibility and caused the vessel to drift.

According to Bernhard Schulte Shipmanagement (BSM), the Singapore-based company that handles the technical management of the ship, all 25 crew members are safe. There is no pollution or damage to the cargo of the ship, with a capacity for more than 20,000 containers.

The Maritime link between Europe and Asia allows ships to avoid going around the African continent (for example 6,000 kilometers less between Singapore and Rotterdam), but it has also experienced the weight of several wars and years of inactivity.

Some 10% of international maritime trade passes through the canal. according to experts.

Nearly 19,000 ships used the Suez Canal last year, according to the SCA.

Devised by Ferdinand de Lesseps, a French businessman, and diplomat, the colossal project took ten years of work, between 1859 and 1869 and involved a million Egyptians,

De Lesseps then turned his attention to the Panama Canal but had to abandon the project which was completed by the Americans in 2014.