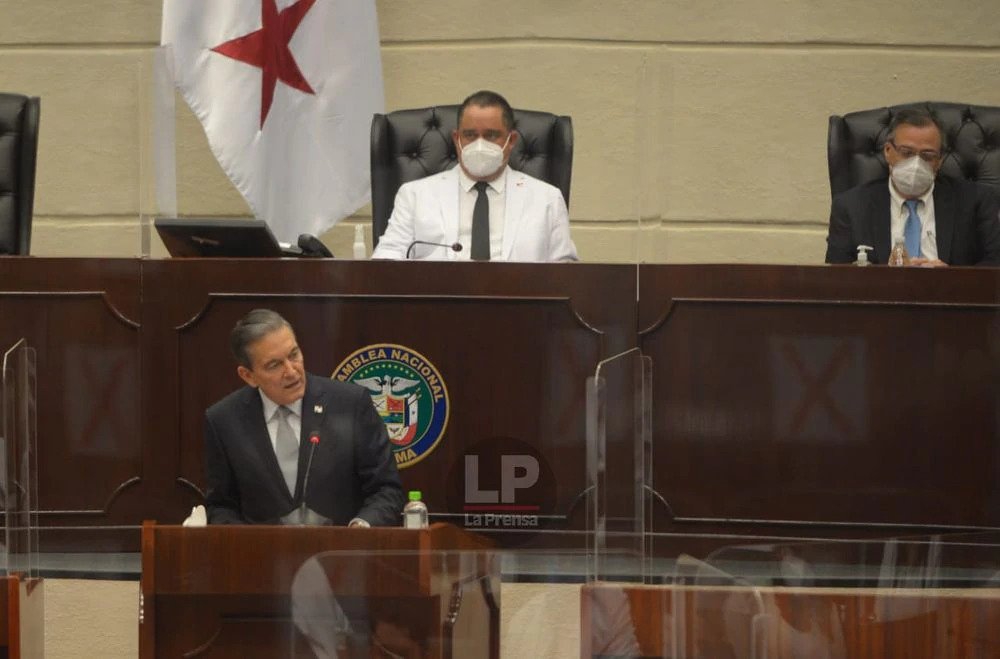 There will be no allowances for officials who are, members of the boards of government institutions.

The money will be contributed to the “Panama Solidario” plan, which provides food vouchers and bags to people financially affected by the pandemic.

Cortizo referred to the Covid-19 pandemic as "the deepest health, social, and economic crisis that our country has experienced ... We are experiencing an exceptional episode in human history and in our homeland. Therefore, this report [to the Nation] has to be different ”.

The majority of the actions announced are soft loans to micro, small and medium-sized companies, and entrepreneurs, who -according to Cortizo- represent 90% of companies and generate more than 70% of the country's jobs. For small agricultural producers, a soft loan program has been created conditional on technical assistance, accompaniment, water harvesting, and agrotechnology, "that is, producing more with less." The program, which in its first phase will have $150 million for loans, will be administered by the Banco de Desarrollo Agropecuario.

Likewise, he spoke of contributing $80 million from the Panama Savings Fund, to reinforce the Housing Solidarity Fund, which consists of the delivery of a $10,000 bonus for the initial payment of people who acquire housing for the first time; Now, that bonus may be applicable to the purchase of residences of up to $70 ,000

A billion dollars will also be contributed to a “special fund to strengthen credit”: $500 million to “guarantee the soundness” of the financial system and another $500 million to finance sectors affected by the pandemic, such as construction, commerce, restaurants, hotels, and industries, among others. Likewise, those companies that have requested not to pay tax based on CAIR, the General Directorate of Revenue (DGI) will authorize the exception for a period of up to 3 years.

Infrastructure projects
Another point of the plan is the generation of temporary jobs through the rehabilitation and reinforcement of buildings and public infrastructure works,“conditioned to use the local labor.”. Another job generator would be the construction Metro Line 3  , which could start in the summer of 2021  and estimated to create 5,000 jobs.

Reopening
Nothing has been heard about the six-phase reopening plan during the past month. The first phase including electronic sales shops, workshops, artisanal fishing, aquaculture, and other services started on May 13 and the- second construction of public infrastructure on June 1.

Cortizo said that the other four reopening phases will be done “gradually, with prudence and discipline, considering the infection rate of the province or region, the level of risk of the activity, the hospital capacity of the region and establishing rigorous monitoring of compliance with biosecurity measures. "

He stressed the need to find a balance "between health and economics".

Mistakes
"Did we make mistakes? Of course yes. The circumstances are unique and exceptional, as we have never faced a similar situation in the history of the country, "said Cortizo.

“All the decisions that were made and will be made will be to save lives. Doing nothing was never and will never be an option, ” he said.

“Urgent reconversion " of beds is still needed for critical areas in centers managed by the Ministry of Health and the Social Security Fund and he announced a goal  4,000 tests a day; Currently, daily average of 2,500 tests.

Finances
The government assumed a deficit of $2.317 billion in the 2019 budget, and "inherited" debts with contractors and suppliers of  $1,836 billion . To face these debts, "it was necessary to resort to external financing", which is why Panama went out to international markets in July and November 2019 and March 2020, "achieving the total amount of $5.8 billion." He said that in the three months of the pandemic, revenue has fallen $900 million, 50% below budget. It is  calculated that Panama will decrease by 2.2% in 2020 but for the next  year growth of 4.2%

Cortizo noted that his government has cut up to $2 billion in per diem, travel, vehicle purchases and some investment programs.

Cortizo announced the presentation to the Assembly of several bills: one, on "tax relief" for MSMEs, through the establishment of a special reduced income tax regime; another, to expand Ampyme's “improving my business” program, which will increase non-reimbursable seed capital from one $1,000 to $2,000 another, to recognize a 10% discount to taxpayers "who pay on time, and another for the development of" agroparks

You know....you entitled gringos are always so quick to pass judgement on the country that opened its arms and welcomed you here. You pass insults as easily as a dog drops a turd and your content is just as gross and nasty as the dog's outpouring. At the same time you sing praises about a country that is supposed to be "the shining light on a hill" that in truth is just a steaming pile of fetid lies and deceit.....led by a cabal of the most corrupt leaders known to the modern world. And the mindset of you and your equally deluded compatriots is the epitome of american exceptionalism, never managing to rise above the depravity of your defining inequality and bottomless antipathy to anything fair and good. The entire world is going through this pandemic, with some countries doing significantly better than others. America, not surprisingly, is doing significantly worse that most, if not all, others. So while you sit here on your privikedged perch, basking in your fragile sense of gringo superiority, look to your roots, that are rotting away at the core. So be careful, when it's time for you to pack up and leave, there may be nothing left worthwhile to welcome you....or atleast nothing that looks like the world you left behind you when you first packed up and ran, like the cowards you obviously are.

They will just make up that pay cut somewhere else under the table. That's where the majority of their money comes from anyway. I guess they think the Panamanian people are stupid

Truest comment. And isn't that what this all boils down to.

so a 25% pay cut for 6 months? Really? The majority of the population have had a 100% pay cut for going on 5 months. The hubris of these Marxists. How about all government workers take no pay until the private workers have their jobs back? You can bet your ass the economy would be open faster than a bowel movement at a fonda.