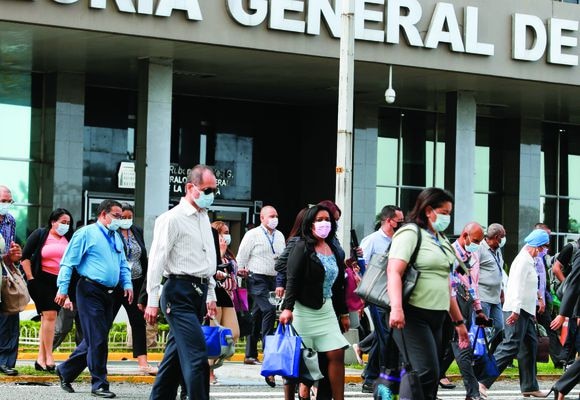 In July 2022, the number of public servants on the state payroll amounted to 255,184 officials with a monthly salary expense of $412 million. The accumulated expenditure on wages in these first seven months of 2022 amounts to $2.814 billion reports La Prensa.

The institutions that registered the greatest growth in civil servants in July were the Ministry of Education, with 1,848; the Ministry of Health, with 1,520; the Ministry of Public Security, with 864; the Comptroller General of the Republic, with 465; the Tocumen S.A. International Airport, with 358; the Ministry of Agricultural Development, with 294; the Judicial Branch, with 262; the Savings Bank, with 190; the Technological University of Panama, with 178; the University of Panama, with 165; the Maritime Authority, with 147; the Fire Department, with 113; and the Specialized University of the Americas, with 109. Compared to June, in July there was a decrease of 1,526 officials. In the National Assembly, 3,919 (which could be temporary contracts); in the Social Security Fund, 164; and in the Empresa de Mercados Nacionales de Cadena de Frío, S.A., 62.

The growth of the state payroll in number of people and spending on salaries has had an upward trend in recent administrations. Although the increase in spending has to do in part with special laws approved by different governments, the statistics also show an increase in the number of public servants.

During the administration of President Juan Carlos Varela, the payroll grew by about 31,000 officials between July 2014, when it began, and June 2019, when it ended. The monthly expense in salaries in that five-year period also rose on average by $140.8 million.

After the protests last July, due to the high cost of living and corruption, the Executive announced austerity measures whose results are unknown. It was reported that the Cabinet on July 12 approved the establishment of a 10% reduction process in the state payroll, the start of a voluntary retirement program for public sector employees, and the suspension of salary increases, except those established by law, among others.

Moody's rating
High state spending was one of the issues to be considered by Moody's to change Panama's outlook from stable to negative while affirming the Baa2 senior unsecured debt and long-term issuer ratings.

The rating agency highlighted that since 2017, Panama's capital spending has been reduced to control general spending. The share of capital spending was reduced to 26% of total spending (5.1% of gross domestic product) by 2021, while current spending increased with disbursements in salaries, transfers or subsidies, and debt interest
Share
Previous Post
Gasoline prices set to take another hike Friday
Next Post
Government move could lead to mine closure - Minera Panamá