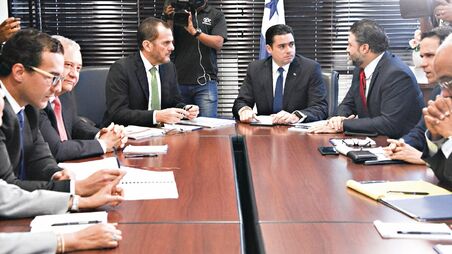 After a week of seemingly smooth transition meetings between the outgoing Varela (Panamenista)   and the incoming Cortizo (PRD) administrations. the amity frayed over concerns expressed by vice- president-elect José Gabriel Carrizo.

On Friday, June 8, Carrizo, after a meeting with the comptroller Federico Humbert, complained about the lack of information on the state of public finances with reduced income and greater spending, and, asked Humbert not to sign new contracts that could further deteriorate the public funds.

The  remarks upsert Minister of Economy and Finance,  Eyda Varela de Chinchilla, shot back. "It seems to us that it is not likely that after 14 hours of transitional sessions [in the MEF], after providing information and explaining actions taken, we spread false information," she said.

President Juan Carlos Varela described Carrizo's statements as "unprofessional and unwise" and said he spoke to President-elect Laurentino Cortizo to complain about the intervention.

II is not the first time that the incoming government talks about the financial constraint it might face once it takes office on July 1, and has suggested even reduction of operating expenses.

' Gabriel Carrizo, who complained about the lack of reports on the current situation of public finances and, asked the comptroller Federico Humbert not to endorse "last minute" expenses or new contracts that could be harmful to the State.

During a visit to the Comptroller's Office, Carrizo warned that "we still do not know with certainty what the state of public finances is."

"We asked the comptroller for the status of accounts payable and other collection procedures submitted to the Comptroller's Office and not yet endorsed, as well as the status of contracts in process," Carrizo said.

It is not the first time that the incoming government speaks of the financial constraints it might face once in power, and even explores the application of a reduction  of operating expenses.

"These figures must be known much faster. We still do not know with certainty what the state of public finances is ... This must be improved. Our team, led by Hector Alexander [designated Minister of Economy and Finance], is in permanent work to achieve this and the Comptroller has made available, in conjunction with the outgoing government, to try to reveal the truths to Panamanians about the and Panamanians of that state of public finances, "said Carrizo.

The figures that  worry Carrizo are associated with the increase in public spending and the fall in revenues, which caused a negative balance during the first quarter of this year, which closed with a fiscal deficit of $966 million. This equals  1.4% of gross domestic product (GDP).

The deficit generated between January and March 2019 is below that required by law, "which means that we have good behavior," said Varela de Chinchilla at the time.

"That kind of statement must be made in coordination with the outgoing government. This type of situation should not be created for the population. I just told the president-elect,” Varela told La Prensa.

He also questioned Carrizo's request to Humbert, since he considers that the Comptroller's Office is not the appropriate channel for the Vice President-elect to request a report on public works since the Executive is responsible for its execution.

"To give orders to the comptroller here is inadmissible …  I don’t know in which part of the country's Constitution it appears that an elected vice president gives instructions to a comptroller, who is chosen by the Legislative Assembly. , "he remarked.

The comptroller clarified that the law limits the outgoing administration not to affect the budget on the issue of operating expenses, but not on investment.

By law, in the years in which the change of government occurs, the outgoing administration (which governs from January to June) can only have up to 50% of the general operating budget, and the incoming administration (July-December) has 50 % remaining.

50% of the operating budget "cannot be touched, to ensure that funds are available for the next administration. However, there is no law that limits the ability to invest or use in investment projects the money that is in the budget.