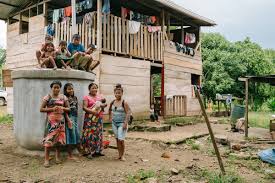 Inequality  in Panama with one of the highest ranks only behind Brazil and Honduras in the whole of Latin America says a newly released report from the Inter-American Development Bank (IDB).

Between 2004 and 2018, the country had an average annual growth of 7%, compared to 3.3% in Latin America. As a result of this economic dynamism, Panama is today one of the three countries with the highest per capita income along with Chile and Uruguay.

The report “Inequality in Panama: its territorial character and the role of public investments” says that the high inequality and its persistence are closely related to the "strong territorial imbalances" that exist in the country.

The document states that reducing inequality in the country is possible if "greater productive activity" is generated outside the Canal watershed . Among other things, this requires an investment in infrastructure that improves the connectivity of the rest of the provinces with the canal area.

According to the IDB consultants, infrastructure in Panama is good when compared to the rest of Latin America, but the analysis inside the country, highlight the very marked "territorial differences

It is not only a problem of social justice, but also of economic performance, since the potential of future activities of the Panamanian economy, such as "tourism" or "quality agro-industry", are located in territories other than the capital of the province of Panama, where most of the economic investments are concentrated.

To reach these conclusions, IDB experts used several indicators as a reference, most of them related to budget investment.

For example, they specify that the 10 provinces of the country absorbed between 2013 and 2017 the greater part of the general budget of the State (98%).

At the other extreme are the indigenous comarcas -three formally recognized-: 1.7% of the budget was allocated during the same period, that is, an average amount of $87 million per year.

In other words, the budget allocated to the provinces is 58 times greater than that assigned to the districts.

The biggest beneficiary was Panama, with an average of 68.5% of the budget, that is, $3.621 billion. That means that for every dollar assigned to investments in the province of Panama, three cents were allocated in the indigenous districts. After Panama, the following in order of importance were Chiriquí (8%), Colón (5%) and Veraguas (5%).

The sector with the greatest imbalance, is transport  explained by the large infrastructure works developed in the city of Panama. For every dollar per capita received in the provinces, the inhabitants of the clmarcas received about 4 cents.

This is related to projects such as the Metro lines or the investment in the Metro Bus, which correspond specifically to the province of Panama.

Severo Sousa , president of the National Council for Private Enterprise (CONEP) , said he agreed that by improving connectivity in populations outside the Canal watershed, can help reduce poverty and inequality in those areas, since in the extent to which they remain isolated it  is impossible for them to develop.