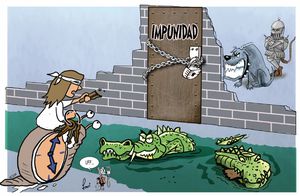 "In my government there will be no untouchables " - Cortizo

Private companies, the hardest hit in this pandemic, with thousands of jobs lost - in contrast to the Government, which has increased its payroll – have had to take the initiative in presenting an economic reactivation plan, since, the Executive, has nothing that can be called a plan.

Simply put, the lack of capacity of this administration to face challenges or tasks of this type, which are its entire responsibility, is unimaginable. This lack of leadership, of an uncertain and erratic course, says a lot about the quality of the politicians who govern us. Its most important initiatives have died in the cradle or show no progress: constitutional reforms, dialogue by the Social Security Fund, transparency in Covid-19 purchases ... All this without counting the unfulfilled promises. Where was that of "we are going to do ... without stealing" or "in my government there will be no untouchables, be they ministers, deputies, big businessmen ..." Or the one that promised "austerity with efficiency", that is, "do more with less". The pandemic not only wiped out the economy but the president's promises. Hopefully this time the execution of the plan remains in the hands of competent officials and with the will to make it happen. – LA PRENSA, May 1.

This is described by one word and it is not Covid-45. Corruption.