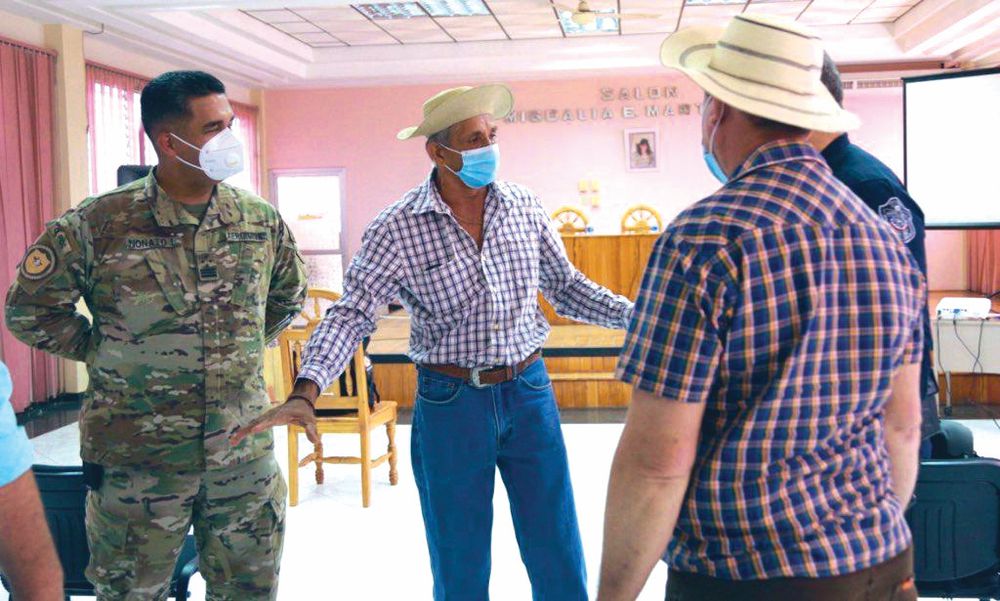 Security Minister, Juan Pino and senior security and Public Ministry officials met with ranchers from the Azuero peninsular on the weekend to discuss increased rustling and the infiltration of narco-traffickers into the industry as a way of laundering drug money.

At the meeting  were National Police Director  Jorge Miranda, the director of the National Aeronaval Service, Ramón Nonato López, prosecutor Efraín Jaén, on behalf of the Public Ministry, and the governor of Los Santos, Rubén Villarreal,

Pino asked the ranchers not to make agreements or deals with those who are taking the cattle from their farms.

“Organized crime has no limits, they sell cattle at auctions and that must be avoided, that is done by filing a complaint and taking the one who is robbing the producer to court, you cannot reach an agreement, because otherwise the crime is consumed and remains as one more statistic ", said Pino

So far during the pandemic only in the province of Los Santos, there have been about 500 complaints of livestock theft. In July a person was sentenced to six years in prison for the crime committed on a farm in El Carate de Las Tablas on April 6, 2020

But one of the issues that most worries the authorities is that, according to data from the Public Ministry, the Azuero peninsula, located more than 300 kilometers from Panama City, has emerged in recent years as the new route for trafficking. of drugs from Colombia reports La Prensa.

Due to its geographical position, the area facilitates logistics issues such as fuel supply for traffickers. And large amounts of drugs can be hidden in paddocks in the area.

According to Pino the weekend meeting was only a first step. Several alternatives were proposed, such as the setting up of a security box on the highway over the La Villa river, the installation of cameras at strategic points, as well as reinforcing compliance with municipal decrees that prohibit the transport of livestock at night.

In addition, together with Governor Villarreal, a site  is sought as far south of the province as possible, on the coast, to replicate the work being done in the air-naval station of the port of Mensabé, in Las Tablas, which began operations in  2012, and partially covers the bay of Parita, in Herrera, and the coasts of the Azuero peninsula, up to Veraguas.

The Narco traffickers have to diversify. Parking tens of millions in concrete condos in Panama City has turned out to be very poor investment as the condos are poorly built, haven fallen in value and are a totally non liquid asset. Smart play to roll their dirty money through commodities. Very telling that even the narco traffickers will no longer touch the collapsing Panama real estate market.

802vi like the way you think. Very good plan to rid a country of useless eaters. Gen B you think that coke herion meth are recreational drugs? Look were it got sleepy Joe using his crackhead son as a bag man. Marijuana has medical use they gave proven that

There was never a war on drugs, the war was to control the drugs. our CIA brings in more drugs then anyone. you can't fight a war when one side is shooting bullets and you yell for them to behave and do right, or just say no.. thats not the way you end it, to end it you must be ready to do what needs to be done. you take huge loads of coke, crack, heroin, meth, and you mix it with a chemical that will kill a user on the first hit. you pour it out all across the u.s. every death you report heavy that it was from a bad batch of coke, the ones that have not gotten it yet will go to the next drug in line which will drop them dead as well. because all of it will be laced with it. put 400k unit hits out across each state overnight, go to known drug streets and hand it out for free and move on. within a week without reporting about it each state should have around 200k plus dead bodies to burn. thats a million plus drug users in a week gone, once the word gets out, the rest will be scared to touch it, the ones that have to have it will do it anyway thinking it won't happen to them. what you just did was wipe a million plus worthless people off the face of the earth, that were doing nothing but stealing and selling their bodies for drugs and spreading aids and other STDS. the rest will stop using, if not hit em all again in 6 months and see how many more you can take out. the demand will be so low it won't make the dealers enough money to mess with it. also anyone caught selling, street level and up gets death. take all the big boys drug toys, property and cash holdings and hand it over to the state. this is how you wage a real war on that problem.

Isn't it time to admit the war on drugs can never be won? All it does is create an inflated price for the junk, making it viable for organized crime. If there was ever a product worthy of strict control and taxation it is recreational drugs. But this will never happen because such a profitable illegal market provides the globalist bullies with an excuse for escalating their war on personal freedom and privacy, especially banking and money transactions, which they plan on fully and completely controlling once everyone is fitted with their tracking system. To them humanity is a herd of animals and should be tracked, traced and controlled thusly.

Isn't it time to admit the war on drugs can never be won? All it does is create an inflated price for the junk, making it viable for organized crime. If there was ever a product worthy of strict control and taxation it is recreational drugs. But this will never happen because such a profitable illegal market provides the globalist bullies with an excuse for escalating their war on personal freedom and privacy, especially banking and money transactions, which they plan on fully and completely controlling once everyone is fitted with their tracking system. To them humanity is a herd of animals and should be tracked, traced and controlled thusly.