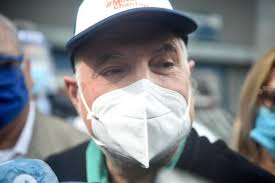 Former President Ricardo Martinelli will be back in court on Monday, July 13, in a hearing on the infringement of rights requested by his lawyers, in the case brought by the Public Ministry over to alleged irregularities in the management of funds of the State Savings Bank (CA) .

The case involves his alleged participation in the granting of a $9 million loan to the original contractor of the Amador Convention Center.

Roniel Ortiz, from Martinelli's team of lawyers, confirmed that the hearing will be held after the Public Ministry carried out proceedings within this process, "despite the fact that the former president is protected by the principle of specialty", contemplated in the extradition treaty agreed between the United States and Panama in 1904

Ortiz said that before doing any diligence, the Public Ministry had to go before a guarantees judge to determine whether or not his client is covered by the principle.

He said that in this case a warning was already presented to prosecutors about the existence of the specialty principle, but that it will now be up to the judge of guarantees to analyze the situation.

However, since January 17, a letter from the Foreign Ministry has been in the Public Ministry, stating the official position of the US State Department, which says that the principle of specialty is no longer applicable to Martinelli.

After renouncing his status as deputy of the Central American Parliament (Parlacen) , the Supreme Court lost the competence to prosecute the former president and sent several complaints to the Public Ministry that have been kept pending.

In addition, there is a case related to the contracts for the supply of dehydrated food, as well as a complaint filed by the Superintendency of the Stock Market for the alleged use of privileged information for the purchase of shares in Petaquilla Minerals , through the liquidated Financial Pacific brokerage.

He is also being investigated in the New Business and Odebrecht bribery cases
ricardo-martinelli convention-center
Share
Previous Post
China bound ship  #10,000 through  expanded locks
Next Post
Copa Airlines will not limit seats on Tocumen flights

Does anyone know where I can score some viagra? Casual observer is getting bored with me.

Panama | Panama vs Venezuela A targeted Goal. Venezuela had oil that was not commercially selling at its low peak. Venezuela economy was drastically at a downward spiral. Venezuela former president prioritized oil revenues as the main economic engine. Venezuela new president decided to use revenues for the elements of his government. Venezuela president automatically used the economic plight in his favor. Panama is a different scenario with the U.S. built canals and Panama expansion canal. Panama new expansion canal was built with several sources of financing including the...U.S.A. Panama expansion canal financing by several banks cannot be easily taken over. Panama canal financing would have to be paid off as completely owned by...Panama. Now, the...[FIREWORKS!!!]. China knows the value of a completely owned Panama expansion canal. China proposes deals of the...century...for Panama. Panama national debt to China has to be paid...$billions. China now owns 50% of the Panama canal expansion. China immediately doubles the Panama toll fees for the canal expansion. China now controls the financial economic activities of Panama ( National Assembly). China now controls 50% of the Panama political movements. China influence includes their sidekick counterpart...Russia!!! Panama continues to eat noodles at Chinese restaurants...$50 million spy headquarter (future). Panama continues to eat free political hams during electoral campaigns. Panama continues to give free passports to fugitives for their underground operation. Panama continues to require aid from China for their financial underground operation. Panama continues to support former president Ricardo Martinelli and his political party. Panama continues the mantra for political party...UNITY...[CORRUPTION]! Panama will be able to pay off their expansion canal obligation in about...7 years or by 2027. Panama financial loans from China will be staggering with misappropriated state funds. Panama financial loans will be in default by...2030's - 2035. Panama's Martinelli sons will play a major role in the underground dictatorship operations. Panama now runs on 50% revenues from the expansion canal but taken over by their government. Panama's revenue estimate...$2-3 billion, doubled by China to $4-6 billion. Panama government dictator now controls $2-3 billion in revenues...every year! China will propose a new larger canal project. China new canal project will compete with Panama canal expansion. China new canal will drastically reduce Panama canal expansion revenues. China will now have complete control of Panama economy with their dictator/s. Panama population...4-5 million and in poverty! Panama will become the new...Venezuela. China and Russia will transform Latin America into communism with the... appeasements of the United States democrats! The facts stated here makes for an easy and obvious prediction. George Klk the new...[Nostradamus!].

Panama | Martinelli Left Panama on a Leisurely Trip...The U.S. Took Notice. An article was published and it became part of the reason for the United States to void the Specialty Principle as not applicable to the former president Ricardo Martinelli...may factor in as a critical point. Panama court appears to dust off his shoulder and prop him up as a dignified gentleman looking for any loophole to protect any objectionable arguments against him...legal collusion. Each and every lawyer must be targeted as strategizing a political persecution case against Martinelli with guaranteed results. The dignified gentleman is a con artist with mafia connections and the case has not come close to acknowledging this fact...his hard core indifference to the cases against him has nothing but his lawyers avoiding the technical legal issues. Maritinelli approach to his defense...the lawyer's threats and restrictions of the court's due process for their untouchable client. Martinelli will eventually need a full battery of body guards for life as he continues to grab for power to the detriment and financial chaos of a spreading wildfire of... money laundering in Latin America. Panama is...NOT...Venezuela!!!