Door to new normal begins to open - you can get a haircut, buy a car 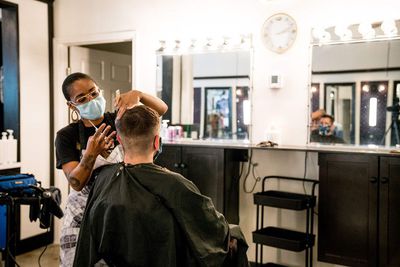 After five months of personal and economic lockdown by presidential decree to combat the COVID-19, the Ministry of Health announced on Tuesday, March 11, the partial re-opening of some sectors after business groups had warned of pending apocalyptic consequences.

Some  69 public construction projects and 15 from the private sector will restart see thousands of workers receiving their pay packets and they will be able to get a haircut or buy a car from Monday, August 17.

But for the rest of the population, the quarantine rules remain in place with a two-hour window depending on sex and ID card and total lockdown will continue on Saturday and Sunday.

Currently, some 70,000 workers are laid off creating a downward spiral for business and government coffers.

The retail trade will be partially activated, but shoppers will not be allowed inside stores and will have to pick up their online purchases from the parking lot, which has already been in operation in some centers. Car sales centers will re-open.

To visit a re-opened beauty salon or barbershop you must attend by appointment and the shops may not exceed 50% of their capacity. About 164 NGOs will also be allowed to open.

The announcement comes after several weeks in which the private sector warned of the destruction of the business fabric due to the prolonged operational closure, which would result in an increase in unemployment from 7% to 15%.

“Two roads diverged in a wood and I [Sweden]– I [Sweden] took the one less traveled by, and that has made all the difference” — this is NOT the same road Panama took—the road dictated by the WHO and the misguided scientific community (and kept on this road through hard-headedness and failure to admit wrong) ... proving to be the road to needless deaths and a disastrous economy. In contrast, look at the Road Less Travelled—the one taken by Sweden! Everyone ridiculed them and projected a disaster in the making. But today, where did that road take them? Their long term strategy is working. Life has largely returned to normal in Sweden, and it all happened without the economy-destroying non-pharmaceutical interventions (NPI) demanded by the “public health expert” class. In August, Sweden has registered just one death (!) with/from the coronavirus. Yes, you read that correctly. One death so far. For the month of July, Sweden reported 226 deaths. They’ve accounted for 805 June deaths, 1646 in May, and 2572 in April. The deaths attributed to COVID-19 went from about a 50% reduction to falling off of a cliff. The story is the same in the hospitals. COVID-19 is hardly registering as a blip on the radar. Sweden has reported just 4 new COVID-19 patients in their ICUs in August. The month of July saw only 52 COVID-19 patients in ICUs. It’s unclear whether this is a result of having achieved the herd immunity threshold, or if the seasonality of the virus is providing indefinite relief. But it’s become absolutely clear that Sweden’s long term pandemic strategy is working. Sweden did not do everything perfectly. Stockholm, like much of the West, failed to protect its nursing home population, where a great deal of its deaths occurred, skewing the general population stats negatively. Sweden was one of the few places where cooler heads prevailed, and the scientists realized that attempts to stop the virus would be worse than the disease itself, in the form of economic and social ruin. Panama, under the influence and direction of the global public health expert class, collectively threw the pandemic playbook out the window, disregarding hundreds of years of proven science on herd immunity, in order to attempt to assert human control over a submicroscopic infectious particle. It hasn’t worked, to say the least. There is sketchy evidence elsewhere in the world that lockdowns or masks have definitively *stopped* the spread of the virus. But that is an argument for another time — we can only compare the ultimate success that Sweden has experienced by taking the “road” they took and compare it with those countries who took a different, more traveled one. The proof, as the saying goes, is in the pudding.

New normal ? Men 2 days out woman 3 days. Did Cortizo has a sexual problem. No he don't. He is an idiot like Wenny paid by himself every day after posting. Panama is death guys. All comes to slow and too late. Even Copa will disappear. Thanks to Wennies Captains and other fully stupid writers here. Realize that he economy is 20 years in trouble from now on. ( only a couple of months under the new normal PRD). Dear PRD you are not able to lead a country. Kill yourself and do Panama a favor.

Yea to this article. If other places in the world can do this, so can Panama. Just wear your facial mask and be careful.