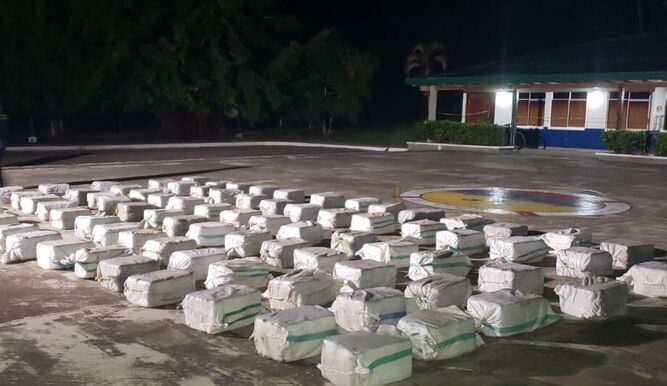 A joint operation between Colombian and Panamanian security forces seized more than two tons of cocaine hydrochloride from a speedboat bound for Central America on Tuesday, November 28.

The vessel manned by four Colombians and one Honduran was captured 24 nautical miles northwest of Punta Arenas, Necoclí - Antioquia, by units attached to the Colombian Navy and the National Aeronaval Service of Panama (Senan), guided by information from the Naval Institution and the National Police.

Aboard were 86 bags with 2,148 rectangular packages of illicit substances.

The cocaine, the crew, and the motor ship were transported to the Urabá Coast Guard Station, where officials from the Criminal Investigation Directorate (Dijin) carried out the Approved Preliminary Identification Tests (PIPH), testing positive for hydrochloride. of cocaine.

That amount represents a loss of more than $70 million dollars for the financial structures of the Organized Armed Group (GAO) Clan del Golfo.

The guy was a mental. You going to shoot all mentals?? How about a taser? Oh...they didn't have any. Why not? Let's just shoot the guy 14 times. What bullshit. Cops with that mentality should be fired or never hired in the first place. And that still doesn't excuse you stupid racist attitude.

No Cas O I saw how stupid the dead was. He was told be the cops to drop the knife. And the cops are not there to run from the dumb dead guy, they are there to take control which they did when the big dumb black guy did not make a smart choice. Don't ha g this on the cops because of what stupid did. And the cops need guns that hold more ammo if they only used 14 rounds. Stupid is what stupid does

In the video did you see how fat that cop was. He couldn't run 100 feet so the only option was to shoot someone. They shot 14 times. Holy shit. No other solutions available???? Right! All you racists need to crawl back under your rocks or someone just might get even.

American White men have historically been one of the the most under-handed and racially prejudiced species on the earth. Give them a forum where they are hidden from view and protected by anonymity, then they become brave and brazen with regard to Black people. This is the very problem with so many White cops killing Blacks in that they are afraid to confront someone that is genetically stronger that can possibly beat the living shit out of them. I live for the day that a White man, with no friends and no weapons makes mention of any of this racist shit in my face.

Looks like Hunter lost next weeks supply. Maybe daddy can do something for him, as he has sold out to everybody else

All this crap you've posted isn't the text book definition of racism??? Look in the mirror and and you'll see one. Feral Negros is a non judgemental statement? You folks are a special kind of stupid.

Yup the video shows the cops backing up telling him to drop the knife and he did not. Now they use that excuse to loot, looters should be shot by the cops and general public at will. Like the old saying you can take the monkey out of the jungle but you can't take the jungle out of the monkey. Funny how they never burn the welfare offices down

I don't think it's racist to point out what is actually occurring and who is doing it. Screaming racist has become the lefts battle cry but now people just shrug and yawn. So overused that it now has no significance.