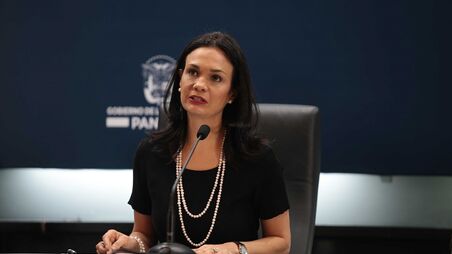 Panama Vice President and Chancellor Isabel De Saint Malo de Alvarado has withdrawn her name from the proposal to occupy a position on the Board of the Panama Canal Authority.(ACP).

She was one of three names put forward by exiting  President  Juan Carlos Varela that raised a storm of criticism.

"I firmly believe that any issue related to our strategic asset requires the maximum possible consensus",  she wrote in a letter to Varela requesting her name be removed from the designation.

De Saint Malo thanked the president for understanding her position and especially for having distinguished her with the nomination, as well as the opportunity to serve the country from her current responsibilities.

"Throughout my career, I have learned that consensus is a solid foundation for building a country; I lived that way when I worked in the dialogues for the adoption of the law that created the ACP, for reforms to the Social Security Fund (CSS) and other processes of national scope " she wrote.

In addition to De Saint Malo,  Vareka had nominated Emmanuel González Revilla, ambassador of Panama in Washington, and Jorge Luis González, Minister of the Presidency.

The designation of González is the only one that was ratified by the National Assembly, but his appointment has been challenged as unconstitutional before the Supreme Court.