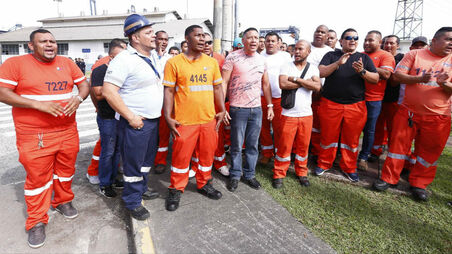 The worker’ strike, in the Balboa port,  is more than ten days old, and at the Friday installation of the Logistics Cabinet presided over by  Vice President, José Gabriel Carrizo, he called for dialogue as containers

Carrizo said that the government will ensure compliance with the law by referring to the need for collective agreements to be negotiated at the established time. In the case of the port of Balboa, the new convention had to be negotiated last year to begin to take effect of January 1.

"The dialogue table is open, let's sit down and find a solution," Carrizo said in a call to unemployed workers.

Minister of Labor and Labor Development, Doris Zapata, confirmed that there is a stoppage due to the need to negotiate the convention.   At this time the dialogue is paralyzed and they propose that communication be established so that the parties feel, said Zapata.

They ask the workers to stop the strike because the company has already decided to withdraw a guarantee that it had presented in the Supreme Court.

The president of the National Council of Private Enterprise, Julio De La Lastra, said that as a result of the strike, some 25,000 containers have stopped moving, causing  heavy losses

But more than this loss, there is the image effect of the country internationally and the loss of connectivity that is caused by the strike.