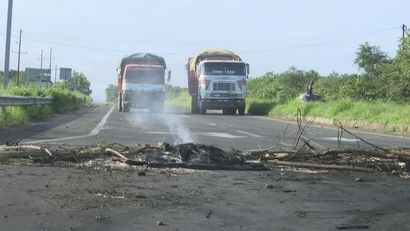 Members of the Chamber of Commerce and the Chinese Association in the province of Chiriquí, expressed their concern about threats of closures on the Inter-American highway, by indigenous groups.

It transpired that the groups gave the National Government 72 hours to respond to the requirements on the basic food basket that they have raised at the single dialogue table in the city of Penonomé, Coclé province.

Felipe Rodríguez, from the Chamber of Commerce in Chiriquí, requested that a parallel table be held to analyze these requests, to see if they are feasible or not.

Weiner Bin Li, from the Chinese Association of Chiriquí, urged that problems be solved at the table and not take actions that are only to close streets.

The closures during the month of July in the east of Chirica generated multi-million dollar economic losses in the province and throughout the country.