Business and anti-corruption groups frozen out of national dialogue 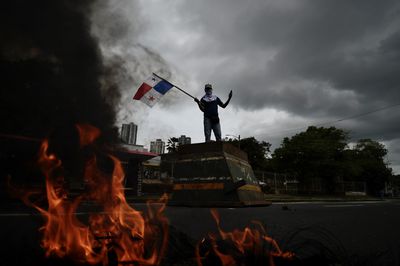 Room at the table only for groups that paralyzed Panama for four weeks.

The national dialogue between representatives of Panama social groups and the Government resumed on, Wednesday, August 3, without the participation of business associations and civil society organizations that promote , anti-corruption efforts have requested that they be included in the worktable.

The meetings will continue as they have been until now, with only with representatives of the gups that led the street demonstrations that paralyzed the country for four weeks.

The Archdiocese of Panama, the institution facilitating the dialogue, said that the challenge is to end the discussion of the topics on Friday, August 5. In the second phase of the process, when the tables are set up to follow up on the agreed issues, space will be given to the other sectors. But there is still no fixed date.

"The first four points were the most difficult, and those that had to remove the pressure that kept people on the street," a spokesperson for the Catholic Church told La Prensa.

The actors have reached a consensus on four issues: fuel prices, basic basket, medicines, and education.

The Chamber of Commerce, Industries, and Agriculture (Cciap) said they have not been given a date for the second phase. “Believing that it is possible to adopt economic and commercial policies without the participation of the private sector not only reveals a profound ignorance of how the economy works but also that its effects could be diametrically opposed to those desired,” said a Cciap spokesperson.

Unfeasible agreements
Different business associations have stated that the discussions at the table have "resulted in agreements without technical support, unfeasible and unsustainable."

President Cortizo, after holding a meeting with representatives of the business sector in the presidency traveled to Penonomé and communicated to Archbishop Ulloa, the importance of including the sector in the discussion. But leaders of the participating groups, including Saúl Méndez, general secretary of the Construction and Allied Workers  Union (Suntracs), have opposed it.

Anti-corruption organizations have criticized the table's methodology for not addressing the issue of corruption and transparency in a "transversal" way.

A coalition of nine civil society organizations argues that the fight against corruption should be a priority and permeate all the issues addressed at the table.