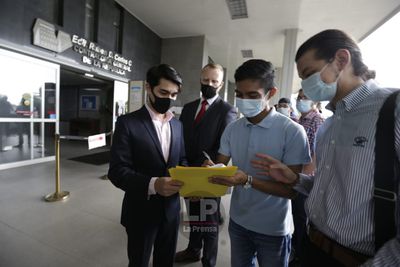 A group of activist citizens went to the Comptroller General of the Republic on Monday, October 19, to request access to information related to form 172 of the National Assembly, known as cashback because of a history of siphoning off a percentage of checks.

Freddy Pitti, from Citizen Action, said that they request to know who was hired under this payroll, if they fulfilled the assigned work and what was the handling of it. "This form has generated many doubts regarding its handling," he said.

“We don't just want to know if there was a duality in payments. We demand complete information,” said Pitti.

Last week, the Comptroller's Office announced that it began an audit of the payroll. And in a previous evaluation, it determined that there is a duality in at least one hiring case ex- PRD deputy Javier “Patacón” Ortega who receives one salary as a consultant and another as a PR officer for the garbage authority.

The National Assembly hired some 1,750 “consultants” this year - to whom it paid $8 million -, including politicians who lost the elections or relatives, under its 172 payroll which disbursed  $8 million, in the midst of the “tight purse” pandemic.